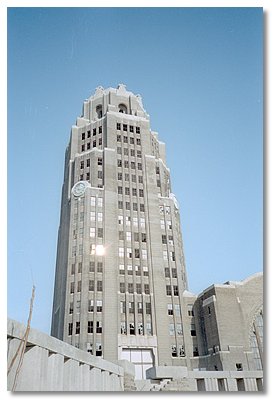 My target was Buffalo's magnificent, long-abandoned train station, the Central Terminal. After 2 days of legitimate sightseeing in low-key Canada, I crossed back to the overstimulated gun-o-rama that we call home. Buffalo, at the time that McKinley was shot, was the 8th largest city in America. Shipping, railroads, and steel had made it rich, although they couldn't keep it rich, and the astounding ensemble of Art Deco architecture downtown, including the 28-story-high City Hall, was clearly built for something much more important than what is now merely the second largest city in our third largest state. Today, it is a testament to being left behind, like the other hard-luck cities of upstate New York.

All the lockers had been disabled so that nobody could blow up that hated symbol of America, the Buffalo bus station. Now, because I could not store my shoulder bag, I would have to lug it preposterously across town to my target. On my one previous urban-exploration outing, I had stored that same bag in a Detroit airport locker and crashed at that airport before flying home the next morning. That was last August 26, a lifetime ago. 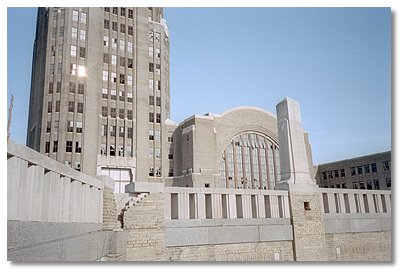 On this fine February day, wondering what the derelict but now regularly patrolled train station held in store, I caught the #4 Broadway bus for the 2-mile trip into the ghetto. It was, by Buffalo's notorious standards, not terribly cold. In any event, thanks to certain long-ago pursuits, I retain a wardrobe suitable for living in a tent in the White Mountains.

In the mid-1920's, the New York Central broke ground for a grand new Art Deco station in Buffalo, to which it committed $14 million. For a variety of reasons, the company fatefully put it more than 2 miles away from downtown, within what was then a middle-class Polish neighborhood. The lavishness of what once was has been described elsewhere:

"'...fleur-de-lis patterns; carved marble finials reminiscent of papyrus leaves; lights faceted like crystals, as concerned with geometry as illumination; and terrazzo floor designs in four shades of marble. Yet it all seemed out of place, swallowed up in the overwhelming, monastic, tan-colored volume of the whole.' The main lobby and concourse were one of the greatest public spaces ever created in Buffalo. The huge arched windows flooded this great cathedral with soft light. The ceilings and walls were made of Guastavino tile. Finishing of the tile was the single most time consuming feature of the interior construction, requiring some eight months to complete due to its complexity." 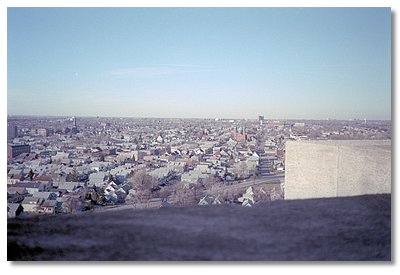 The station, which included a 271-foot-high office building and a 225-foot-long, 58-foot-high waiting room, finally opened in the spring of 1929 - 6 months before the stock-market crash. After World War II, the rush to the automobile killed off the magnificently outsized depot. Amtrak fled to a compact downtown location in 1979, and the forsaken building limped through a succession of ineffectual owners for some years afterwards; the elements, looters, and vandals have had 23 years to attack it, longer than the 14-year siege suffered by the Detroit train station. Recently, a local group has striven to rescue the station, but it sorely lacks the millions needed.

As I approached the majestic ruin, savoring the bracing air and the crisp blue skies, I was struck by how much the place resembled a giant Philco radio from the 1920's. The semicircular window above the waiting room gave it that familiar shape. I was wary of having some squad car roll out to confront me, but maybe the police themselves didn't want to sit outside on a February afternoon in Buffalo. Nobody bothered me as I sidled past small reefs of snow, looking for entry, a place to hide my untenable luggage, and a route to my destinations: the waiting room and the roof of the 271-foot tower. 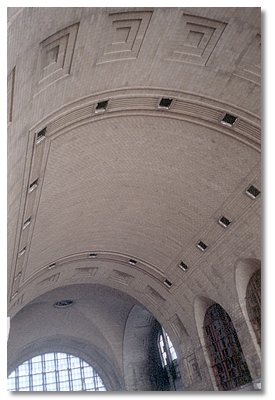 The complex was actually two buildings divided by a set of tracks. In the old days, an enclosed archway over the tracks allowed passengers to cross safely from the elevated waiting room down to their platforms. However, in a disgraceful act of expedient vandalism in 1982, the railroad simply demolished that concourse so that double-stack (taller) freight trains could pass between the buildings. Now the two jagged halves of the complex stand divorced from each other; you can, from the precipice of one building, stare into the exposed interior of the other. When the supposed stewards set an example like that, who are they to protest when locals throw rocks through the windows and strip the copper flashing from the roof?

The space under what turned out to be the waiting room was blocked by chain-link fence. The authorities have yet to introduce the joys of barbed wire, but they had purposely omitted the customary crossbar above the fence. Instead, the top row of the fence's points was purposely kept exposed, almost as good as having barbed wire. With the fence shimmering and clanging under my weight, I laced my chilled fingers around the upturned points of the top row of mesh, gingerly raised one leg and then another to the other side, and hit the frozen dirt with a thud.

I thrashed around through a succession of ransacked offices on the lower levels, at first literally on the wrong side of the tracks. Some of the stair treads had completely rusted away, and I hastily retreated from a strangely spongy roof. On the correct side, I took one staircase that was abruptly bricked up. Then in a stroke of luck reminiscent of my trip to the Statler Hotel in Detroit, my flashlight beam caught the outline of another staircase in the ceiling. I circled through a few rooms of frozen wreckage before finding the actual stairs. 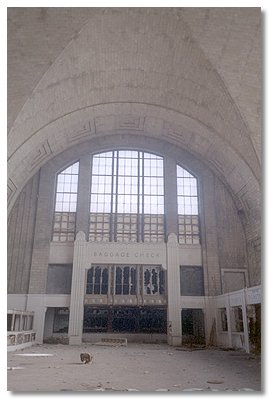 Where was the waiting room? A couple stories above track level, it turned out, which is why I was so initially baffled. I climbed over the bottom half of a plywood barrier that some malefactor had smashed, and as I rounded the corner, there, unmistakably, was the amazing, tragic waiting room in its ruin.

On each end of the glorious 225-foot-long space, a semicircular window of dozens of broken-out panes soared over the rubble- and ice-covered floor. On the west end, that window was ablaze with late-afternoon light pouring into the station. Now only one visitor, rather than hundreds of milling passengers and employees, stood dwarfed under the towering, barrel-vaulted ceiling to admire the show, surrounded by wrecked ticket counters and shop fronts under the enormously lettered BAGGAGE CHECK and TICKETS. The silence was monumental. As I headed upward into the tower, the various floors were fraught with ice slicks. However, the efforts of the restoration group became apparent. Light bulbs inside electrician's cages had been strung along the stairs, and the doors leading to the floors of offices had received brand-new knobs. The door to the roof, capping the 16th flight of stairs, was padlocked; its missing window was covered by bolted-on steel plate that some predecessor of mine had already begun to attack with metal snips. There was no getting past the padlock. I descended to the 13th floor, the highest accessible one with balconies, to enjoy the brisk air and the sweeping views of the neighborhood and the Art Deco skyline.

I retrieved my luggage and strode out into the ghetto to catch my bus. This was the kind of blue-collar Slavic community that had died innumerable deaths in innumerable Detroits, Chicagos, and Buffaloes as white people moved out and black people moved in; the steeples and domes spoke of Central and Eastern Europe. The street names around the station, Kosciuszko, Sobieski, and Paderewski, made even clearer who used to live here. 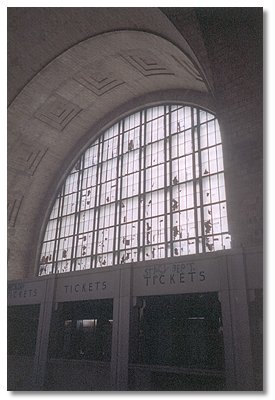 One church's spires were now topped by crescents, but there were still an operating Polish Catholic cathedral and a Russian Orthodox church across the street from each other. I wondered whether the descendants drove in for mass every Sunday from the suburbs or whether the churches simply served elderly, dwindling congregations.

My ¾-mile route to the bus stop went past a series of extreme fixer-uppers and past indestructible kids playing basketball in the middle of deserted streets. Twenty minutes and $1.45 later, I ended up at the airport, where suddenly everybody had money again.

About 50 years seems to be as long as America can stand its great buildings. The wreckers came for Penn Station in 1963, only 53 years after it opened. A similarly short life was granted to the slender, elegant Singer Tower in Manhattan, at 612 feet still the tallest building ever torn down (in 1968, after only 60 years). In Buffalo, Amtrak deserted its costly-to-heat white elephant 50 years after an optimistic railroad with a wretched crystal ball opened it to the public.

Last night I watched the movie "Best Friends." It is a so-so romantic comedy from 1982, but it has poignant location shots of the Central Terminal before the Visigoths got to it. To my surprise, it was scored by my favorite film composer, Michel Legrand. As a melancholy jazz number played over the final credits, I thought back to that winter day in Buffalo. You must believe in spring.