As December of another year squandered in the East loomed, the time came to pursue "rare miles" in a hyper-congested urban corridor.

Two rail routes exist between DC and Baltimore. The better-known one is the Amtrak line, formerly the Pennsylvania Railroad, which also carries Penn Line commuter trains. Everyone and his dog have ridden it.

The rarer alternative I wanted is CSX, formerly the Baltimore & Ohio. It has a DC-Baltimore commuter train too but only during weekday rush hour. The Camden Line terminates at Camden Yards. From a previous legal ride on the commuter train, I knew that it has a shaggier, less developed landscape than the relatively manicured Amtrak line does.

It was my third try at jumping a train this year, including one effort in West Philly, where I spent a couple chilly, darkening hours on a brownfield site a few hundred yards from a freeway overpass. I wasn't going home empty-handed this time, no matter what.

A bus I caught near the Baltimore Sun took me to a catch-out point recommended by a certain online physician. I trudged to a certain viaduct past strip joints and a highway howling with traffic.

Almost immediately, an approaching train presented me with opportunity and a problem. The southbound was coming in at a crawl for a crew change. So I wouldn't have long to wait, as hoboing goes. But the approaching unit, with its million-watt headlights blazing, was only a few hundred yards away. I didn't want to be seen by the hogger, so I was trapped on the less preferable, steeper east embankment below the elevated track.

The train kept chugging south into the yard, and I picked up splinters, thorns, and scratches charging uphill at it. A couple times I slid back down in the dirt, making me wonder if I would shamefully fail to reach my train in time. Finally I turned sideways like a mountaineer cutting steps and made it.

After half a mile or so, the train stopped for its crew change. It sat idle for more than an hour. Meanwhile, junkyard workers beside the train kept feeding cars into an apocalyptic device called the E-Z Crusher, which deserved its own scene in "The Sopranos."

I never heard the hiss of the units abandoning us, so I knew the departure would occur sooner or later. The train's standstill enabled me to switch to the cubbyhole of a grainer, the best place to stay out of sight.

Once the train came back to life, it took a long, long time to break out of town. It worked its way through an aged industrial landscape that I didn't know at all. As long as I stayed inside my cramped cubbyhole, the legions of would-be informants at every crossing or idle commuter platform couldn't see me. But staying in there for the duration meant I'd view only snatches of countryside between my car and the next car. 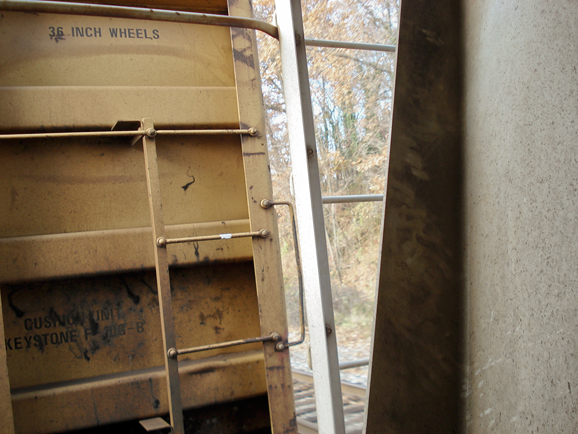 It wasn't a Western realm of splendor, but I was glad simply to complete my self-imposed assignment of riding a freight before the year ended. Probably the most memorable part was Jessup, which had both a max security prison and a yard. The freight eventually accelerated into PG County and on into DC.

Here came the delicate balance between forcing events and embracing absolute safety. Forcing events leads to consequences like my permanently dilated pupil. On the other hand, timidly failing to jump off on the fly might mean an odyssey to Richmond.

Periodically, the train slowed down, and I would lower myself from the ladder to pinwheel my legs. Each time, it was faster than I would like. To my relief, shortly past the Deanwood subway station in NE DC, the train ground to a halt.

I had ended up in the same part of town where I'd bailed 13 years ago on an even shorter ride. Later, I realized that both trains must have stopped to work at Benning Yard in SE DC.

The challenge now was to exit the elevated, hyper-visible tracks ASAP. I had some anxiety about whether various goons would be rushing to the scene in the post-9/11 hysteria. Behind me lay the electrified and fenced-off subway tracks, while in front stood miles of chain-link fence topped with barbed wire.

In 2001, I had gone over the barbed wire with much clanging and rattling, but this time I sought a less attention-grabbing exit. I kept moving until I found a staircase-like structure providing an easy descent to the street. 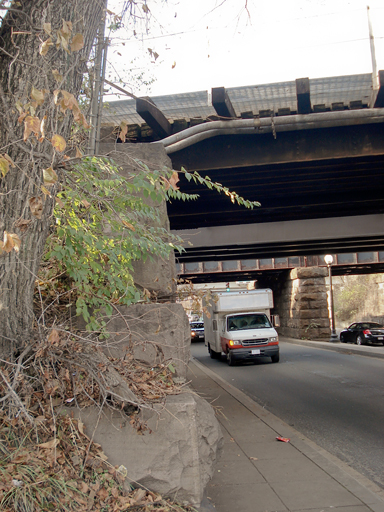 Less than a mile away, I rejoined the legal world by catching the Orange Line out of Deanwood. It was past 2:30 pm; the freight had taken 2 h 45 m to go 41 miles. Keep offering service like this, and people are going to take passenger trains!