Just finished another cross country trip from NYC to Oakland. Last fall I crossed the heartland via the Overland Route on UP, so this year I wanted to ride the Highline on BNSF. In October I'm gonna try the Sunset Route. Here is the run down...

Caught the 127 NJT bus in the late evening from Times Square/Port Authority over the Hudson River to the CSX IM yard in North Bergen, New Jersey. Waited on leads heading north and caught the early morning, Q109 hotshot to Chicago while it was doing its brake test. I've ridden this train before and its one of CSX's hottest trains, consisting entirely of UPS, Swift, JB Hunt and Schneider piggybacks. We cruised up the Hudson River Line and then into Selkirk at which point I wanted to switch to a pig further back in the consist (I was fairly close to the head end). I pitched my backpack off the side of the train and watched with dismay as it rolled off the ballast, down a hill and into dense foliage. It was still dark and it took about a minute for me to find it in the bushes, all the while the train was rolling by at 10 mph up on the levy. Jumped back on one of the last pigs and a couple miles later we stopped for the crew change. We left a few minutes later and rolled on though to Syracuse, Buffalo, Cleveland and Willard with crew changes along the way. Twenty four hours later and 900 miles out of NYC, we approached Chicago. I've come to learn that twenty four hours on a piggyback is about my limit - after that I start feeling stir crazy and just want to get off the fucking train. I bailed at Toyota Park in Chicago, right outside the CSX Bedford Park IM yard (the trains final destination). Camped out under an overpass that looked down on the leads. 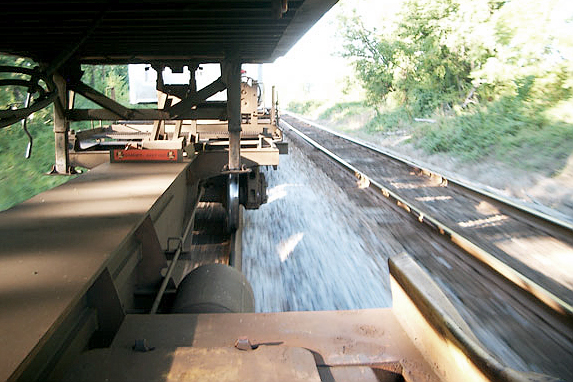 In the morning I caught the CTA bus to Cicero, where I planned on catching out on the highline via BNSF. I'm always surprised how spread out Chicago is, you definitely can't walk between the yards. Since the Clyde Metra stop is now closed (and thus limiting yard access) I planned on riding a transfer string into Cicero and then switching to the correct train. This turned out to be a total waste of time and I spent the whole day/evening waiting for a transfer string into the yard. Finally around 11 pm a DS stopped for clearance and I climbed onto the platform. Rolled a few miles towards Cicero but just outside the yard we stopped and then sat on the mainline for the next three hours! It was 4 am when we finally pulled into the yard and the fleet of Pacific Northwest bound trains were long gone! Cicero is a fairly busy yard with little cover and I felt naked getting off the train. I lowlined to the nearest fence, made note of the holes and quickly slipped underneath it and back onto the streets. 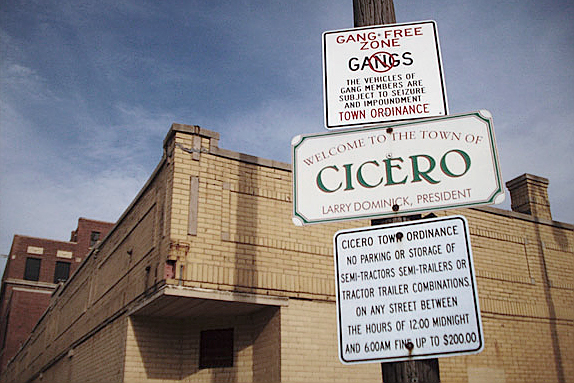 Returned the next evening and entered the yard through the holes I had noticed the night before. I worked my way across the yard to the IM facility and watched as they put together an IM/DS train. The IM area is a little sketchy - it is well lit with little cover and you're on the same roads with semi-trucks, loaders and bulls. Watched as a five unit head end coupled onto the Z-CHCPTL and pumped air into the back of the train. Around midnight the train began to pull out so I made my move and caught a piggyback on the fly. This was my first time riding BNSF and they completely lived up to their "race track" reputation and we climbed out of Chicago going at least 70 mph. We rolled alongside the upper Mississippi river and blasting through big swarms of fire flies lighting up the night - it was beautiful! Then a few hours later we pulled into La Crosse for a crew change. There was a bunch of drunk flintstones waiting under the bridge for a DS with a ridable well - good luck! These seem to be few and far between these days as TTX is converting all their ridable 48s into 40s. 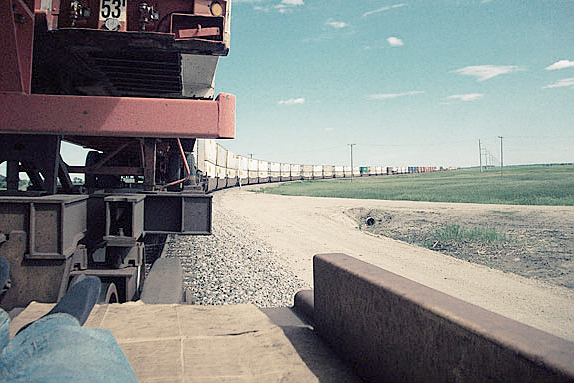 We rolled through the day and into the evening and passed through Northtown, Dilworth and Minot with crew changes along the way. I had been a little worried about some of these hot highline yards but because it was the 4th of July weekend - there was almost no activity. There is not a lot in the way of scenery in the northern plains and the ride seemed to drag on forever and by 10 pm I was starting to burn out. I was at my 24 hour limit again and almost out of water so I decided to get off at the next crew change - Glasgow, Montana. The train slowed down and stopped on a siding and I watched as a car drove out to the units and people exited the cab. I assumed that we were in Glasgow and that I was witnessing a crew change so I bailed and walked about a mile over to the Missouri river and set up camp along the banks. Swam in the river then fell asleep while watching the 4th of July fireworks exploding above the nearby town. In the morning I walked into town to get some water and more supplies. That's when I discovered that I was in Poplar Montana - a tripped out, backwater Sioux Indian reservation, 70 miles east of Glasgow. The people reminded me of that town in the movie "U-turn". I got my supplies then bounced back to the siding praying that another train would stop. Spent most of the day chilling by an abandoned grain silo and watching IM/DS trains blasting by without stopping. Finally in the early evening, a GM stopped to let another pass, so I climbed on an empty center beam car and rode it into Glasgow. I bailed and crashed in a nice field at the eastern end of the yard. 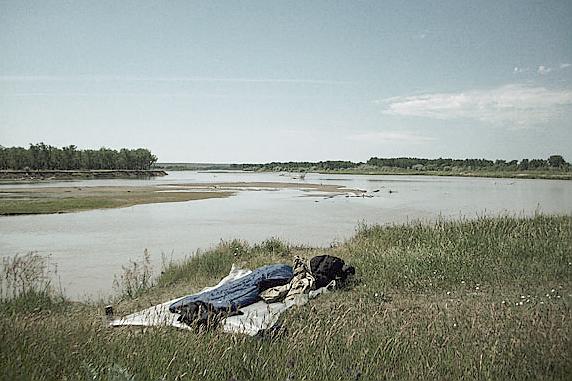 In the morning I caught an IM pretty quickly and we highballed across Montana towards Havre and the 1000 mile inspection. As the train drifted into Havre, I stowed my gear and climbed up on the axle gear of the pig - I wear mechanic coveralls when I ride just for this sort of situation. As we came to a complete stop for the inspection, I looked over and sitting on the very next track was the fucking SP 4449 steaming away! I was tempted to try and ride it blind baggage but it was surrounded by all sorts of BNSF suits and train geeks going ape shit. Workers on quads pulled up to both sides of the train and began their visual inspection in unison. I was on the very last piggyback and there was a lot of activity just a few feet away from me with yard workers checking out the SP 4449, going back and forth around the train and messing around with Freddie. In hindsight, I won't ride the last car in a consist again - you're pretty exposed. 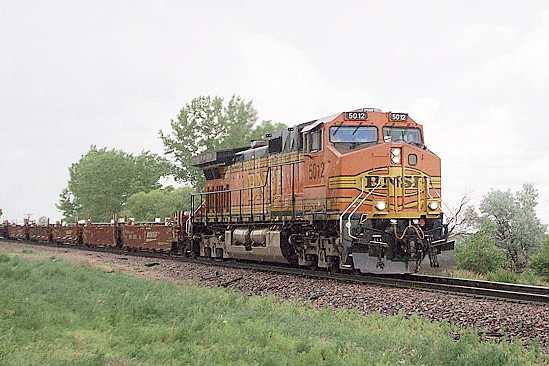 An hour later we pulled out of Havre and began climbing up onto the plateau above town. I climbed out from under the axle and a few miles later we came to a complete stop. Sitting there I noticed that the air temperature had changed dramatically and that it was now cool mountain air. We sat there for another thirty minutes and I started to wonder what the holdup was. I glanced towards the head end of the train and tripped out! Approaching on the horizon was a menacing looking lightning storm that had turned the sky black. The train just sat there watching and waiting like a deer in the headlights. I started gearing up for a wet ride and the storm hit right when I was trying to put my long underwear on! Lightning began striking all around and rain came in from the side pushed by 35 mph winds - in a minute I was completely soaked even while being under a pig. I was not looking forward to heading into the Glacier mountains cold and wet. Passed through the storm and by sunset I was mostly dry again as we entered Glacier National Park. This section was probably the scenic highlight of the entire trip. Four hours later the train stopped for a crew change in Whitefish and I got off and crashed in a field right next to the yard. I was fucking beat and fell asleep almost immediately!

I woke up at dawn surrounded by three horses checking me out and realized that I was on some rancher's property. Went into town and got a hot coffee then made my way over to the city beach to clean up. I really like the town of Whitefish and swam and shaved in the lake in the early morning - it was heavenly! Spent the rest of the day getting supplies and watching the workers knock cars around in the yard. I stumbled on the jungle there which is stocked with free water and food from a guy in town and met a real cool old timer named Big Boy. We spent the rest of the evening talking, then around 1 am the Z-CHCPTL pulled in for a crew change and I climbed on a piggyback. Slept through Flathead tunnel surprisingly and woke up as we were pulling into Hauser for an hour layover. Thirty miles later we pulled into Spokane and I realized that they were setting out the block of cars that I was on, so I scrambled and got another. The train kept moving and we crew changed in Pasco, then rolled on down the beautiful Columbia River Gorge and into the train's final destination - the Portland Lake yard. 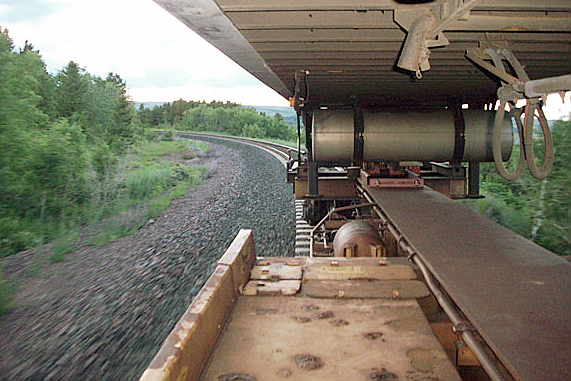 I was juiced to be in Portland and headed across town towards the Steel Bridge. Resupplied and a couple hours later went down to the Junction and waited for a south bound UP train. Catching out here was very easy and I caught a hopper on the fly that bypassed the Brooklyn yard. I had been riding Z-Trains for a week straight so the Q-PTRV felt like it was moving in slow motion! I was pretty fried at this point and slept the next eight hours until we rolled into Eugene. Went over the pass and crew changed in Klamath Falls and Dunsmuir. Then as we approached the Rainbow Bridge in Roseville - I bailed and caught a local bus into Sacramento. It dropped me off at the Amtrak station in downtown Sac and I walked over to Haggin Junction to catch a final train to the Bay. It was fucking hot that day - in the upper 90s, so I chilled by the American River - swimming, eating wild blackberries and waiting for a train to stop on the trestle above. Three hours later a DS stopped for clearance and I climbed up the levy and jumped on a 53 with a big platform. We rolled past the Mothball Fleet in Benicia and just past the Richmond yard, the train pulled over on a siding and the crew went dead. I didn't stick around for a new crew and caught an AC Transit bus a few miles to my folk's house. It was an intense trip - eight and a half days and around 4000 miles. Can't wait to hit the rails again in October.