Got to the Dunsmuir yard around 5:30 pm. Pleasantly warm and mostly clear. I'm supposed to meet Dave Williams - he got to Roseville this morning to catch a northbound up here to meet me on his way up to Portland and Pocatello. The yard is filled with cars (unfortunately, none of them have power on them). Instead of heading right for the jungle, I thought I'd hang out in a boxcar for awhile to get out of a light wind and read the newspaper. Right now I'm in a boxcar (BCIT 841922) that Collinwood Kid marked up in on 5/22/96 and said he was only in for a little while waiting for a westbound.

Track 6 has a short string on it and tracks 8 and 10 are full of northbound cars. I might sleep in this box tonight instead of in the jungle (hope they don't move it). The wooden floor and several airbags were hard to resist, but I hate to have to scramble in the middle of the night if it starts to move, so I moved "camp" over to the jungle area in the southwest part of the yard. Aside from the din of a million crickets, I slept rather well. 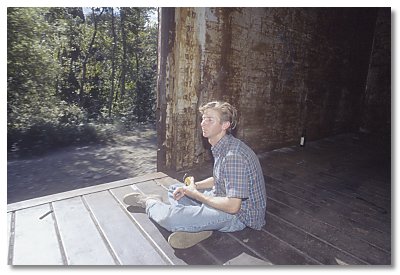 Another northbound came in at around midnight, another at 2 or 3 am, and another at 5:00 am. The "plan" (such as it was) involved somehow meeting in the yard when a train came in, or, that failing, meeting at the Nutglade Cafe in the morning. Seeing the futility of finding anyone in the yard at night after the moon went down, I resigned myself to "plan B" and went back to sleep. I got up at 5:30 am and walked up to the main jungle, then went back to sleep until 7:00 am, when another northbound came in. Standing on the east side of the train, I didn't see Dave so I walked up to the Nutglade, where I met him shortly after 8:00 am (he got off on the west side). Slurping up their killer coffee like there was no tomorrow, I made a "railfan" call to the depot and found out that there was a northbound ready to leave the yard in a half hour, so we motored away and found the only boxcar on the train had some "unusual" grit all over the floor, but we hopped in anyway and left town at 10:30 am. Had smooth, fast ride up to Klamath, getting in at around 2:00 pm. Left town at 3:00 pm and had another smooth, fast ride up and over the Cascades. Almost sleeping through Eugene, we bailed off several blocks past downtown at 11:30 pm and walked back to a motel I'd stayed at before (with mixed results).


The next morning was spent checking out Eugene (great bookstores!) and at noon we headed out to the yard. My usual luck (or lack of it) with asking for directions or information held out again. I initially inquired as to the frequency of busses out to the freightyard area, and was told that they leave every half hour, but when we were ready to go we found out that they actually leave every hour, and we'd just passed one a few blocks from the bus stop. Figuring that the person who gave me the false information must surely be a Mormon, we decided to walk out to the yard instead of wait almost an hour for the next bus. Unfortunately, the "walk" out to the yard took over an hour and a half. Finally, with cement-like legs, I collapsed under the bridge on the south end of the departure yard to wait for a southbound, while Dave familiarized himself with the immediate area because the next day he'd be catching out for Portland from the same spot.

Dave headed back into town shortly afterward and I was left with a wine-less afternoon waiting for a train. Fortunately the weighty tome I purchased at the bookstore kept me from thinking how good a chilled bottle of White Port would taste, but as the sun began to set and the reading light dimmed, I was reduced to flicking pebbles at a beer can and trying to decipher the cryptic monikers left by droves of wetbacks. Someplace called "Sinaloa" must be to tramps what the Dominican Republic is to baseball players. Another tramp boasted about riding "all over" and, to prove his point, included a crude compass next to his name, with the "east" and "west" points reversed - too much White Port, I figured. 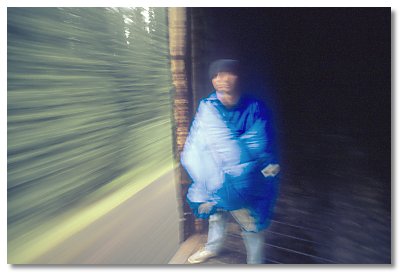 At length I retreated into the yard and climbed into a gondola on a string that a carman said was "going south". The rear two-thirds of the car was loaded with bars of metal about 4" square and 20' long, while the front was a seething mass of detritus that only a scrap gon could hold. Not having the luxury of another ride available, I proceeded to scrape away the innumerable valve springs, small chunks of hoses, rusted ball bearings and the myriad of ephemera that anyone who has ridden a gondola has an intimate knowledge of (so much for grammar...). To my great relief, we pulled out of the yard at 9:30 pm, after "only" a 7 hour wait. I had scant minutes to enjoy the euphoria of leaving Eugene before I had to climb inside my bivvy cover to escape the swirling cloud of dust in the car. No sightseeing this trip. I woke up once to take a leak and the next time I awoke we were in Klamath at 6:00 am. An hour of crew changing and switching and I was on my way home. Still entombed in my nylon sarcophagus, I finally had to emerge when the sun came up and began to bake me, but I was on the flanks of Mt. Shasta and Black Butte and Dunsmuir were only an hour away. Bailed off just after noon on Saturday and hit the Nutglade for more of their magical coffee. If I had it to do over again I'd take lots more wine and a respirator!