We have all been stopped at a railroad crossing watching a passing train. The hobo is a somewhat common sight riding along in an open boxcar. Have you ever stopped to wonder, where he is from, where he is going, and what made him choose this way of life? Well, there are many reasons why. Hobos have been around since the Civil War. Back then, they were called Hoe boys - men who carried a hoe or a shovel around from town to town in search of farm work. In the past the hobo population has been sort of an economic indicator. Their numbers would increase during a crisis.

Black Tuesday, October 29, 1929, was the start of the Great Depression. This brought on the Golden Age of the American hobo. During the Depression, many Americans headed westward if they had a car and a few dollars in their pockets. However, those who had nothing had only one choice - a free but illegal way to travel - freight hopping. Back then they were called "gentlemen of the road." Many hobos showed signs of having once been white-collar workers. They wore jackets, vests and Florsheim shoes. During the Depression, it is believed that as many as one and a half million hobos were riding the rails.

They had a culture all their own and a code of honor that had been handed down for generations. They weren't bums; bums begged and hobos worked. In order to find work or a meal, they would look for distinctive signs left by other hobos.

"A hobo is a man who will work when he can get it, at a decent wage, but insists upon the right to beat his way from town to town to better his condition... men of character, not yeggs, crooks or bums".

Of course, things change with time and there have been significant changes in the definition of a modern-day hobo. For starters, they are no longer called hobos. They refer to themselves as tramps. There are a few who still live like the old-time hobos, working when they get the chance, proud that they aren't beggars. However, the majority of today's tramps don't even bother to look for work. They collect food stamps; some even collect them in more than one state with fake ID's. A tramp who doesn't drink can double his money by buying food stamps for fifty cents on the dollar from another tramp who would prefer to have cash to buy booze. They also manage to get a hot meal from missions (soup kitchens); however, a mission will only feed them for so long. After they have outstayed their welcome at a mission, they simply move on to the next one.

That is the life of hobos, freedom, freedom to do as they please. They needn't worry about things such as bills, permits and licenses. They do, however, need to look out for the bull, because they can be given a ticket. If they don't pay the fine, they can be thrown in jail for a few days. But hey, what's wrong with that? The tramp will be given hot meals and a warm place to sleep for a few days.

But not all hobos are like this, there are many different types of people who hop trains. Some are the poor, homeless, migrant workers or immigrants. They hop trains to get from one place to another because they have little or no money and it's a free mode of transportation. The rest of the train hoppers, hobos, and tramps are the adventurers. They ride the rails just for the thrill of it, though I'm sure there are many people who would call them crazy. My father happens to be one of these adventurers.

It all started about two years ago. My father told us that he had always wanted to hop a train and that before he died he would. He couldn't find anyone his own age foolish enough to go with him so he decided to take my boyfriend. They rode from Dunsmuir to Klamath Falls. My mother, sister and I thought OK, now Dad has gone on his ride and that's the end of that. Boy, were we wrong, it was only the beginning. After that first ride, he was hooked. He said, "I've come to the conclusion that for me, freight hopping is more than a hobby, it's a grand passion and a way of life I can't let go. My bag is always packed and when my bones tell me to go, I find myself waiting for a train."

After that first ride, my father began riding almost every weekend. He even went and bought himself a scanner, which he tuned to the railroad frequencies. This allowed him to hear all communication between trains and the dispatchers. This way he would know if there was a train coming, where it was headed, and where it was stopping. All he had to hear was that a train was doing work at Black Butte and he would take off from the house.

On his trips out to Black Butte he met and talked with several tramps. Some of the tramp's he met were Modoc, Arkansas, Carlos, Pothead, Ron, Jim, James, Bob and North Bank Fred. One of the things he found out about the tramps was the fact that they always share anything they have with another tramp in need. When he commented on this, a tramp told him "If we don't look out for one another who will?" On one of my father's outings, a tramp named James came out of the brush and asked him if he had anything to eat. James said he was starving to death. My dad had just finished eating his lunch and the only thing he had left was a granola bar. He gave it to James and apologized because he didn't have more to offer him. James replied "That doesn't matter, you gave me all you had, that's what it's all about".

He watched as James walked back towards the train. There were two Mexicans sitting in the open boxcar that James was approaching. Before taking a bite, he extended the bar to his companions and not until after the two had both refused did he eat the granola bar. Another example of a tramp's kindness was when my dad met a man named Jim. He asked my father if there was somewhere near where he could get some food. My dad peered into the boxcar they were standing next to, and saw four young Mexicans who were probably in their teens (tramps call them rainbow riders because they are runaways). Dad then turned to Jim and told him there was a Burger King about a mile down the road and that he would be glad to give him a ride.

When they got to Burger King, Jim opened his wallet and a lone $10 bill was all that lay inside. He pulled it out and with a smile said, "Get ten of the 99 cent burgers for my friends." My dad knew that Jim was headed for Klamath Falls and that he would now be broke when he got there so Dad pulled out a five and said he would split the cost. Jim replied "You are a man with a big heart!"

Jim had only met the four runaways that morning, yet he was willing to spend the last of his money to buy them some food. Jim explained his actions by saying "Well , the kids are hungry and like the baby birds, someone has to put something in their mouth." When they returned to the train, Jim motioned for my father to stop. He ran up to a boxcar and offered a hamburger to an older sick tramp who refused saying "Give it to the kids back there, they are hungry." Jim then walked back to the runaways' boxcar and quickly divided the burgers amongst his hungry friends.

Although these hobos and tramps have been around nearly as long as the rails they ride, their numbers are decreasing. There are several factors that have led to this. Changes have been made in the food stamp program that only allows tramps to collect for a limited time. The railroad has become more determined to rid the rails of tramps due to liability cases where tramps have sued the railroad. Many of the newer cars being made don't have any place for a tramp to ride. Some rail yards have even installed infra-red sensors to detect a tramp's body heat and all riders caught are cited for trespassing 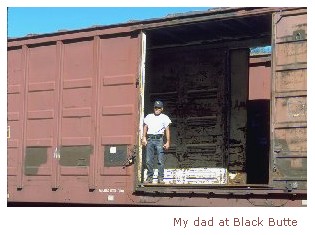 Though I'm sure the railroad just thinks of these tramps as a nuisance, they are part of our American history. I wouldn't want to spend my life on the rails, but I can understand why my dad enjoys it so much. I went on a short ride with him. It was only from Black Butte to Dunsmuir. However, it was long enough to get a taste of what it's like. I enjoyed it very much - the sights, the sounds and partly the thought that I was doing something that I wasn't supposed to be doing. I think that's one of the reasons my father likes it so much, that and the fact that you can see some of the most beautiful scenery in the world through the open doors of a box car.

Bindle stiff - a hobo who carries a bundle, usually containing shirts, socks, razor, etc.
Bull - railroad security person
Catch out - to hop or jump on a freight train
Crumbs - lice
Hotshot - a train with high priority over other traffic
Piggyback - a flat train car that holds trucks or containers
Power - the engines powering the train
Reefer - refrigerated box car
Snake - railroad switchman
Streamlined - traveling with little gear
Work - when a train has to either pick up or set out cars on a siding, the train has work to do
Yeggs - criminals, burglars

This is a poem written by some unknown traveler - it was left on the water tank at the Black Butte siding: