I met Johnny Crane and his friend Tom in the Dunsmuir yard (where else?) and we began to "hang" and wait for a northbound. An hour or so later, after beginning to "decant" a bottle of White Port, our northbound pulled in the yard and we found what was arguably one of the grungiest gons I've seen in recent memory (the last week or so). We selected that particular car partly because of the great view it would afford us on the scenic ride around Mt. Shasta and on to Klamath Falls, but mainly because it stopped right in front of us and I didn't want the sediment in the White Port to slosh around and "bruise" the subtle nuances of berries, apples and cinnamon that make up the noble "palate" this wine is famous for.

Grabbing several large pieces of cardboard to soften the lumpy floor, we made ourselves comfortable and soon took off up the canyon. It was too late in the year for the Azalea and Tiger Lillys but the waterfalls at Shasta Springs were as full as usual. Unfortunately, once we got to Black Butte and began to speed up the real scenery was lost to our squinted eyes due to the swirling clouds of rust, dust and who knows what else. 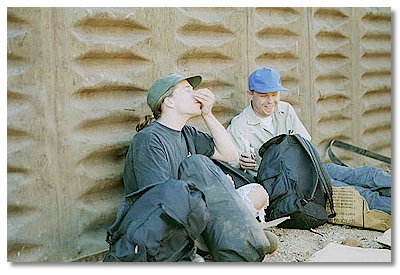 Finally making it to Klamath after switching to a boxcar at one of many stops, we got a motel near the tracks mainly for the use of the shower, since it was after midnight and getting up early would rule out a lengthy sleep. The next morning, after saying goodbye to Johnny and Tom (they were headed to Eugene) I stopped at Gino's Market for coffee, a doughnut, and the paper and began the usual vigil of waiting for a southbound. After an hour or so I saw a headlight coming, but the train was all pigs... another hour, another headlight, but all empty doublestack wells. Finally, about 11:00 am the trash train came in (blue doublestacks) but pulled all the way down to the south end of the yard to set out their BN caboose. I "power-walked" the length of the yard and got to the last stack just as they were putting the FRED on. Since it was the southbound version of this train the containers were empty, but they still didn't smell like no bed of roses! Also, they were 45' containers, so there was only an 18" well to cram myself into, but it was a ride so away I went.

I soon found out that a major tie-replacement program would slow my trip to a crawl, but it was a nice day and I spent alot of time on the back "porch" so it wasn't too bad. I finally got back to Dunsmuir at 7:30 pm - 8 hours instead of the usual 4! Oh well, at least I could look forward to washing my clothes...