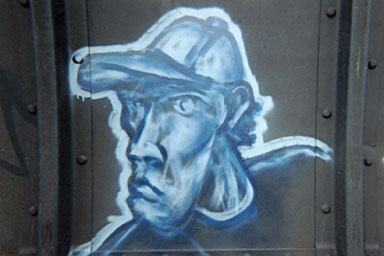 "A hobo's loco to go into that mountain on Dirty Face. Bulls drag out guys long past lookin blue."

That's what yard workers and old bos caution on the transcontinental route west of the Rockies because engine smoke snuffs life. Nevertheless, a few hours ago in Nevada I was obligated to board an eastbounder just behind six big engines that rumble like beasts.

Now the flatcar rolls under my buttocks and the Colorado breeze and sunshine smack full on the face, until I look up and see the tunnel mouth approach at 30 mph. Ther're many ways to skin a cat, and I tick each off: the ballast's a blur and too sharp to jump onto; the engineer's mirror shows him rapt or I'd wave to slow; the brake hose dangles nearby for an emergency stop, but the bulls would have my ears at the next yard. The last option is to count the green pines marching like a gauntlet to the opening in the mountain.

The car I hold down is a piggyback - semi-truck trailer mounted on a flatcar. This pig has a history: It may have begun at a San Francisco port loaded with Oriental wind-up dolls, then hauled by truck to the freight yard. There the trailer was placed on a flatcar for the sweep by iron road to New York, where it'll roll off and be pulled by truck to a store for unloading. The pig is always part of an express train that cannonballs across the nation faster than a Greyhound bus, and with more comforts. I can recline beneath the belly, or lean against one of the fat tires as I do now for a 360-degree view. It's a throne for a king of the road, ordinarily

Now the bore engulfs the six locomotives and the tail of smoke touches the throne, then my world turns black. I feel in the rucksack for a bandana to snug around nose and mouth, and a sweater to wrap the jaw and neck. I've passed through hundreds of tunnels in America without incident, but never the Moffat, the longest at six miles.

"If ya gotta ride through Moffat, don't sit near the engines or yer last breath will be a hot, stinky one." I can't heed the warning today.

One mile into the tunnel. Noise ricochets along the shaft. Air burns. Dizziness arrives. Deep in reflection

Two miles into the tunnel. A road partner, Iron Horse, and I once rode into St. Louis. Let's jump before the yard - big city bulls are nonsense, I say. Lead the way, he replies warmly. But a white Bronco with a CB antenna pulls aside the moving freight before we vault. A pistol points at my heart, and a bull behind it. If you have a weapon I will shoot you.

The freight jerk-stops and the Bronco brakes. "We have no weapons. Shall we disembark here? I do three things in the initial minute with a bull: Show my hands even if he doesn't bring up weapons; acknowledge his authority by asking permission to move; and toss a two-bit word to tip I'm not an unintelligent drunk. It surprises how high a bulls eyebrows raise with the mention of a three-syllable word.

Get off. Iron Horse and I hop to the ground looking like we just rode from the Pacific, which we did, and the dick separates us from our gear before putting the gun away. I place him as a Viet Nam vet by age, demeanor, and an earlier cheekbone hollow now filled by easy living. There are lots of war veterans on the rail carrying a bindle or wearing a badge.

Iron Horse is a Minneapolis stand-up comic, and veteran dumpster diver. Right off, he butters the bull. "Officer, what's the most feared animal in the freight yard?" "Not sure", I answer for the cop who glares at Irons dirty beard, tattered overalls and rats nest hair. "The weasel, officer. Whoo, whoo Look out for the train weasel."

I shrink, and don't blame the bull if he shoots Iron. Instead, he guffaws. "I'm giving you guys a break, and a ride out of the yard. Come back and be arrested. Iron takes the cue and launches an advanced repertoire. The bull drives off shaking his head like hes been in funnies, with my partner yelling, "Officer, a train leaves in an hour. Be under it!"

Three miles into the tunnel. I slip deeper under the piggy-back for cooler breaths but find only rank gas. Noise deafens. It's pitch black and another memory takes hold

Once, I wish to catch a freight from Salt Lake's Rio Grande yard, tarrying all morning by the main line in the woods. I enter the yard to solicit information. The ploy is to hide the pack and stroll boldly through the employee gate wearing a washed face from a nearby brook and clean overalls to pass for a worker. I get the dope from a brakeman, then exit without the bull knowing better. Later, the intelligence proves false as no train arrives, so I case the area for a telephone. If one's found the ruse is to phone the yard master who monitors arrivals and departures. The conversation typically goes: "Hello, this is Mr. Jones calling from Farm Lane outside the city. The wife wants to snap a photo of the engines passing our barn. What time's the next train leave?" The usual response is, "Two p.m., Mr. Jones. Say Hi to the missus." Sadly, today the nearest phone is at too far a march, so I search for a novel stratagem as the day's light fades.

Although too greasy now to reenter the yard as a worker, fallen tree limbs litter the field between the woods and the workers hut next to the security tower. I devise to rascal in as a tree. I hold a branch my height and having thick foliage at arms length and edge toward the hut. Ten slow steps - pause - ten more. I'm inside the yard in five minutes where a different brakeman provides the correct departure time, and I retrace the same way. Sure enough, here she comes on schedule fresh full of diesel. I slide into a gondola and ride out.

Four miles into the tunnel. Beside myself with suffocation, I must remember or pass out

Years after my debut as a tree in the Rio Grande yard, a bull tangle leads to a court date. This times it's at Salt Lake's sprawling Union Pacific yard with two partners - Gizmo Kid, a computer wizard at IBM, and Colorado Casey, a best-selling business author and consultant. We ride atop a portable parking lot (automobile carrier) into the Mormon city.

Three specific freight cars the tramp must turn to with caution: the locomotive, though I've ridden them through snowstorms to be near the heater; the piggyback with its valuable cargo under lock and key; and the car carrier where radios and tape decks can be heisted. Why does an honest man board the latter? Sometimes theres a car door key taped under the bumper, and that extra set of springs is comfy, especially with a hoboette. There's music, and a plaque on the window with the car's destination.

In fact, I point out a previously broken car window to the two men that leads to discussion on what to do if the bull spots us getting off. He'll surely inspect us and the automobiles. In any other scenario, the cop's first nab is a courtesy let-go, the second is a ticket, and the third is a ride to the cross-bars hotel. But today, there's a vandalizing that could finger us.

The train stops with the quandary still hanging. The hobo code says to keep quiet and let others, except road partners, fend for themselves. However, another urges to protect the good hobo name. Squeezed by the thoughts, I decide to tattle if the bull nabs us, but if not that's that. The bull spins up in a white Scout. "Sir, there's a window we didn't break". He doesn't swallow it and writes three summons to appear in Salt Lake court within three days. We go the next morning.

The judge, with a graying top and leftover smile from decades of pounding the mallet, sees us instantly. I propose to take the rap since I ratted to the bull, plus the other two have business meetings later this week. His honor asks us each about ourselves, and even so the Gizmo Kid eyes the elderly man's Freemason ring. The Kid, having once caught a set of encyclopedias in his head, flashes the judge the secret fraternal sign.

Dismissed without prejudice! I gawk at the Kid who whispers it means we go free. I start to mumble thanks, but the judge cuts me short. Men, it's all part of the adventure.

Five miles into the tunnel. I'm a poisoned bug on a mechanical worm. Smoke balls the stomach and limbs twitch until, with one mile to go, I faint.

At the opening there's a sharp sweetness of fresh air and sunlight. I made it!

On the downhill miles, I philosophize. I didn't go into that tunnel reckless and didn't come out brave, only scrambled inside. It ain't disgraceful to dance a dying jig to the grim reaper's fiddle, and this just was one of those days. I'll hold down a different pig another day, but not through six miles of smoke.

(What happened to them? Colorado Doug Casey is a noteworthy financial author/advisor at www.douglascasey.com. Arthur Gismo Kid Tyde III created the two billion dollar Linuxcare and flies a private plane. Iron Horse Iowa Blackie was elected national hobo king on a platform of stamina rather than humor on the sixteenth try at Brit, Iowa. Doc Bo Keeley is still seen in a laptop glow behind Dirty Face, the locomotive.)