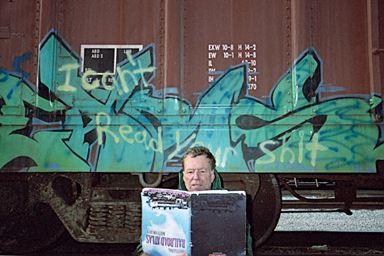 Washington is apple country and in season a northbound hobo is likely an apple knocker - picker. I'm on a southbound boxcar and there's a clomp, clomp, clomp, outside the moving door. It doesn't make sense and maybe I've gone soft in the head.

I just chased and hopped aboard two minutes ago. Listen. A bo sleeps with his boots on and his ear near the track, can roll his bed in a minute, trot alongside his ride, toss in the roll and then raise himself. My rule of thumb - after having tripped and fallen dangerously close to 3-foot cookie cutter wheels - is to catch a freight on the fly only if I can run as fast as it.

Clomp!!... clomp!!... clomp!! The steps are further spaced as the train accelerates. A burlap sack sails through the door and bangs the far wall. Suddenly there is a scrape on the wooden floor next to me and a foot disappears out the door. Again a shoed foot enters the door, scuffs the deck and exits. A hobo is trying to catch at 20 mph.

I peek out the door and there hangs a bo on the latch. He's graying, strong and in tattered clothes, no doubt an apple knocker in trouble. The metal latch of a boxcar hangs like a 2-foot stem and bo's in days of old would grab it on steam trains and swing aboard. It required sharp timing and I've never seen the technique utilized on modern faster moving diesels freights. 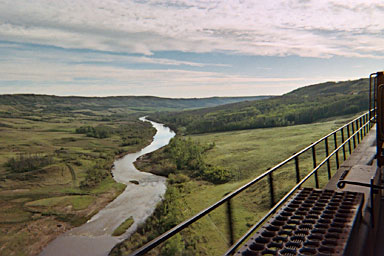 A pace is reached at which it becomes perilous to let go the latch and face the ballast, and that's the fate of my peer. His strides are fifty feet long, his lungs heaving and his foot thrusts into the door shortening. In seconds he could grease the rail. He doesn't realize my presence and to pop my mug out the door might frighten him, so I make a decision.

From his perspective, a hand descends from the sky. The skin is tanned, fingers willowy and it beckons. I feel a meaty grasp as his takes mine in a death-lock. The train picks up speed.

I've traveled most the gridiron west of the Mississippi, camped the jungles. Been around the world in a boxcar, I tell folks, since that's the estimated rail mileage in some 300 rides. Though I'm just a boxcar tourist out for summer scenery and adventure, it's ironed the body.

Now a man is dangling like a scarecrow from the side of a fast freight, attached only by my hand. He's my size and I pull hard, but it's a tug-of-war as the rail joints click by. Seated, I skid along the floor toward the edge and waiting space. Then my trouser seat meets an oil spot and suddenly I slide at once.

BAM. My foot hits the door frame and braces for the final pull. Tenaciously I lift. He has blue eyes, like mine. With a heave he's in the boxcar and safe.

There are a number of unwritten rules of the steel road. First, don't steal anyone's boots. Second, look after yourself first. Third, if you're okay then give a hand to peers. Fourth, no need to speak of the obvious. Fifth, partings come easily.

The fellow crawls panting to a far corner, dragging the burlap, then sits on it in silence. We jiggle along for miles without a word. The sun sinks and still nothing, as the train passes from Washington to Oregon. Somewhere in California the freight stops and he slides out the door, shaking my hand.

I've never picked an apple, but I've picked a hobo.