I was supposed to meet some friends in Roseville last Sunday afternoon and planned to catch out of Dunsmuir late on Sat. to avoid the nasty Valley heat. Getting "the itch" a day early, I thought I'd ride up to Klamath on Fri. night or Sat. morning and catch a southbound from there to Roseville. Drove to Dunsmuir at midnight Fri. and crashed in boxcar in the yard. Awakened at 3:00 am by northbound but after leaping up from death-like sleep and rolling up, looked out the door and saw it was all pigs so, not wanting to incur Roger's wrath, I rolled out and went back to sleep. Awakened at 6:30 am by another northbound (this one a junker) so rolled up and found clean boxcar - left yard around 7:30 am. Coming into Klamath at noon I saw a southbound with 4 units in yard apparently waiting to leave but couldn't tell if crew was aboard because of reflection of sunlight off incredibly dirty window on lead unit. Bailed off as soon as I could and motored over to Gino's Market for "sustenance" and sped back to the yard, where the southbound still sat. I was to find out later that my haste was a waste...

Hung out in empty boxcar near back end of train drinking beer, eating deli sandwiches and reading the paper for what was quickly becoming the remainder of the afternoon. Wasn't too worried, though, cuz even if I didn't get out 'til after dark I could still get down to Roseville in time. As afternoon turned into early evening, and my thermometer still reading 102 degrees in the boxcar (only one side open) there was a distinct drop in my level of enthusiasm, which later bottomed out when I discovered that my remaining bottle of White Port had achieved "room temperature", and tasted like gasoline for the first 50 or so swallows. Feeling rather "giddy" from the heat and my nitro-like beverage I dozed off for a few hours, trying to lay as close to the open door as I could to receive the meager benefits of the 1 mph breeze outside the car but also concerned about falling out should my slumbering flailings for a cool patch of floor push me in that direction.

Sometime later during my "nap" a string of cars that had been in the sun all day were parked right next to my open door and the heat radiating off them was too much for continued sleeping, so I hopped out and wandered aimlessly for awhile, keeping within range of the box in case the train ever pulled. Just before dark a tramp walked up and said that the train had come in at 7:30 that morning and he was as eager as I was to get the hey on the road. Finally, at 7:45pm we got our air and started to pull down to the west end of the yard, only to stop about 20 cars down and dynamite. After some yard work our power re-connected and again we started south, only to stop AGAIN in another 20 cars or so and dynamite! At this point I said the heck with it and rolled out, and around 11:30 pm we FINALLY left Klamath. 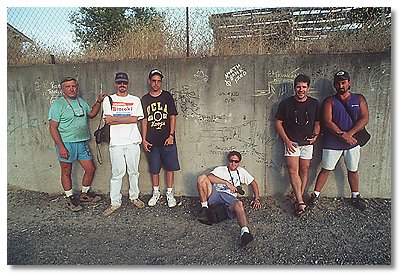 Anticipating a nice dark, cool ride down to Roseville, I fell asleep instantly, only to awake at Black Butte at 2:00 am. Thinking we were just in the hole for a meet I went back to sleep, but awoke, alas, still at Black Butte the next morning. After sitting around talking with numerous tramps that appeared from various locations on my train for a few hours, I decided to forget about further train travel and drive to Roseville, but after an hours walk into Weed to call Shelley to come pick me up it didn't look good for our 2:00 pm "meet" there. She drove me to Dunsmuir to pick up my truck where I grabbed a cup of coffee and headed down the Valley - 4 hours later after a miserably hot drive I parked next to the yard and just as I was getting out of my truck up drove my friends (shown above)! Pure luck, as they had spent the day cruising the yard looking for hobo tags on cars and just happened to be driving by when I arrived. I nailed down a motel room to use as a "base of operations" and we all had a great time for the rest of the day and a good part of the night. The depressing part of the next day, aside from having to drive back up the Valley in the heat (it was still 107 degrees at 6:30 pm last night) was seeing the train I had spent so many hours on parked AGAIN with no power on a siding about 10 miles north of Roseville. As I drove by I could see a few of the tramps I'd talked to the day before standing in the same boxcar!