I've been looking forward to my fourth and maybe final train trip, since I'm graduating in two months. The first year, 1995, I rode from my town of Missoula, Montana to Vancouver (WA), Seattle, and back to Whitefish (MT). From there I hitchhiked home. The next year I set out eastbound with no particular destination in mind. I went to Alliance (NE), Denver, Amarillo and finally Winslow (AZ). That trip I flew home. The next year, 1997, I rode west to Spokane, then cut a sharp right and took the hi-line to Chicago - one train, 2½ days. The trip back got me busted in Minnie and I Greyhounded it home. This year, I wanted to cover some new routes, get some miles in, and most importantly do a round trip and get a train back home. Did I do it? Read on.

I made a plan to meet The Grinch in Ogden (UT) on Wednesday night. I left Missoula on Friday morning with my friend The Wombat. That gave us about six days to get to Ogden - should be enough time to go via Laurel (MT) and Denver. At Ogden, the Wombat would bus it home to get back to work and The Grinch and I would continue to Portland (his home) and then me back to Missoula.

We had a great ride to Laurel. Getting out was a bitch, and the Wombat headed home on Sunday morning. I grabbed the last car of a short southbound on the fly at noon that day. The ride to Wyoming was excellent. 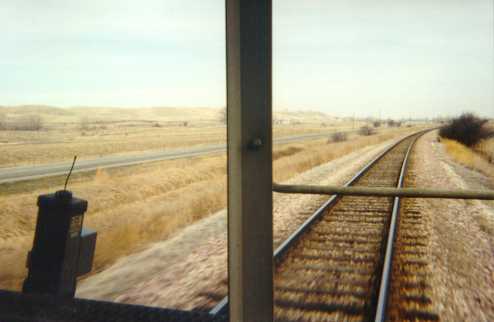 My train got yarded in Greybull, WY (a crew change) on Sunday evening. I strolled around town for a while. When the sun had gone down and I didn't have a train, I approached some yard workers to inquire and found them to be enormously helpful.

It turned out that the train that I'd come in on was almost ready to go out southbound again. They had switched it a bit, and moved it down to the other end of the yard. It couldn't leave until it got one of the units on the train that was being switched, so they invited me to hang out with them. They also mentioned that it was a really muddy (½ mile) walk down there, so why don't I let them give me a ride in the Suburban. "Okay", I said.

They told stories of the "Big Nuthin', Same Fuckin'" railroad. (that's BNSF!). How cars, and even whole trains would get lost. How they were given laptops to record yard activity, but then couldn't use them because they wouldn't download. How he had to give information by voice to a gal in Denver who hardly spoke English.

I rode around with them while they finished switching that train, then they drove me over to the outbound train. It had changed since I'd been on it before. The hopper I'd ridden was now right behind the units, but was to be set out at Bonneville - "There's nobody there, no water, you'll be dead by noon tomorrow if you get set out there because you'll kill yourself due to boredom". Other rideable cars were sitting in the yard now, and some gondolas I'd seen before were full of "irradiated earth". So, they suggested I sneak into the 2nd unit (the third was a cabless type GE). Then, they asked the engineer if it was okay, and he said yes.

The brakeman welcomed me into the GE B30-7A. He'd been kicked out of the lead unit because there was an engineer trainee up there. We chatted about all kinds of stuff for a while, then after he finished his switching duties at the first stop, we both fell asleep. Being in a cab was a new experience. It's pretty loud in one of those cabs - louder than a stack train anyway. The brakeman told me that he figured that it was quieter riding on the rolling stock. But with wind, flat wheels, draft gear and track noise, it's pretty damn loud back there. They dropped me off just outside of the Casper yards at about an hour before dawn. I would've stayed on, hid in the toilet compartment or something, but I'd heard that this train was going to Lincoln (NE), not Cheyenne. 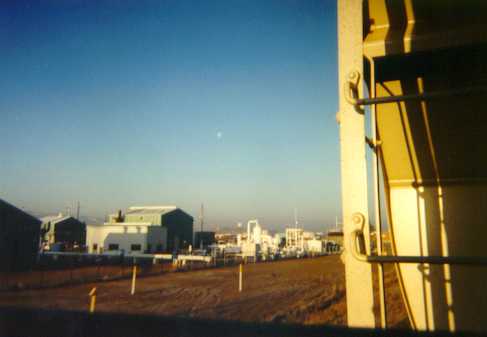 I found another southbound in short order. Soon, I was rolling through a dense, frigid fog in central Wyoming. Cheyenne bound on Monday morning. It had taken three days to get to Casper from Missoula, and I wanted to be in Ogden in less than that from there, so maybe going to Denver would be too much. By the time I got to Cheyenne, I had decided to switch to UP there and head west.

I grabbed a double-stack well at the UP yard and fell asleep. Tuesday morning was chilly - barely 20 degrees. I'd only covered about 175 miles overnight, I figured via my road map. Sleeping under my blanket was okay, but now in the Great Basin of the Continental Divide, we were at 5 or 6,000 feet elevation and I was really feeling the cold. I prayed for sun and had a breakfast of oatmeal and prunes. The air gradually warmed up, and I stayed down out of sight because I-80 was right next to me. The next stop was Green River (WY), a quick crew change. Another 30 miles west took me to Granger, where the track splits: Ogden or Pocatello. My train took the south route. Before too long, I was travelling over the Wasatch Range into Utah. Some beautiful scenery accompanied the light snow, which turned to rain. I ate chocolate.

My train rolled into Ogden mid-afternoon Tuesday. I had over a day to kill before I met up with The Grinch for our trip to Portland. I had a bit of a walk into town, then I found myself a cheap motel and my weary bones hit the mattress.