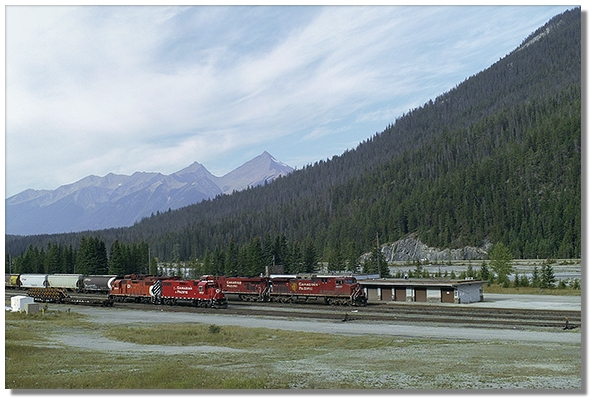 As darkness descended a grain train crept out from the depths of the large Port Coquitlam yard and continued east over the Pitt River bridge. Once the engines were out of site we grabbed a rideable porch and readied ourselves for 4,000 Kilometers of Canadian countryside.

The mountains east of Vancouver got steep immediately. Even in darkness the massive silhouettes of earth could be seen clearly against the starry sky. It looked like the summer rains of Vancouver were gone, leaving with us warm weather and mountain fresh air.

The Frasier river canyon is a must-do for any sight seeking hobo. Cliffs hundreds of feet above the gushing waterway and trains on both banks inches from the steep edge give a sort of climatic feeling to the adventurous. From North Bend to Kamloops there is only a thin spattering of villages so riding exposed during the day presents little concern.

Kamloops sits along the Thompson River and has all the luxuries of a city. For freight train travelers it has excellent swimming near the east bound catch spot, liquor, a library, and the Canadian National crew change for those that wish to ride towards Edmonton. We planned riding CN to Jasper, but the distance from town to the yard was longer than anticipated so we lazily caught the next CP grainer running east. 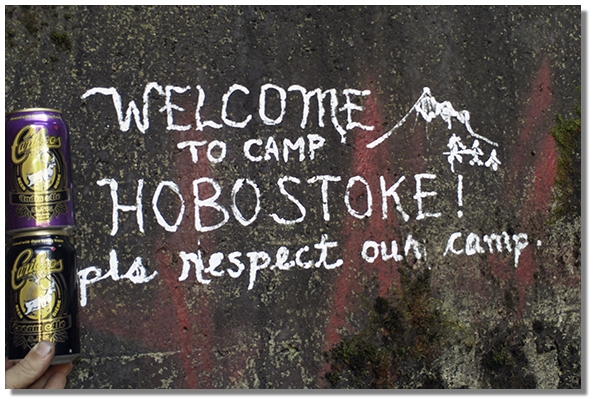 Revelstoke is an enchanted land. We trotted into town on a rail bridge with glaciers on all sides and a torrential Columbia River beneath. The jungle along the catch spot is quiet and dark with only the faint and often loud twig snapping sounds from a multitude of beasts that crave hobo backstrap. Downtown is a short walk and resembles many small mountain towns with plenty of what you need and not enough of what you don't. The first rail cop of the trip was seen watching an inbound stack train. We took note of this with little concern and grabbed a grainer porch for the ride to Field.

As if Revelstoke was not beautiful enough the peaks and glacier blue waters near Field in the Yoho National Park kept my eyes wide and grin wider. We arrived in the early hours so I spent the day getting acquainted with the small community before setting camp near the yard office to watch a few trains pass into the night. We wanted an early morning ride to assure seeing the mountains of Banff and the legendary spiral tunnels winding through Kicking Horse Pass.

A grain train aired up and started to tug a few hours into sun-up. We were on board and ready for the last day of Canadian Rocky sightseeing. The ride to Calgary was filled with epic scenery and a brief stop near a glacier cold river for a freezing plunge before diving back into the grainer hole to avoid the plethora of CP track workers that watch every train upon passing. The peaks of Banff are the most jagged I have ever seen. 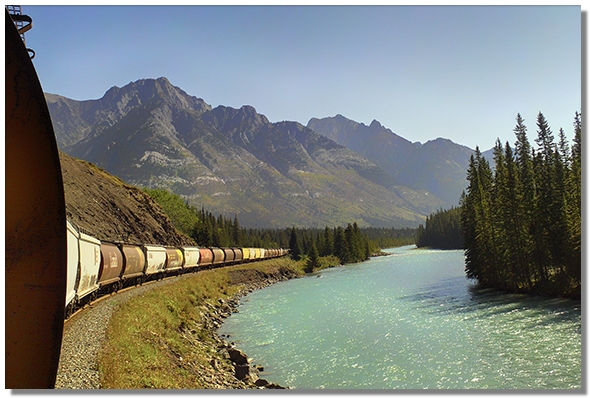 Calgary looked to be a nice city, as far as cities go, but we did not care to find out and grabbed the first grainer porch heading into the wheat fields. It crossed my mind that riding an empty grainer through wheat country could be a disaster. The worst case scenario would leave us stranded in a place miles from the nearest road with less than one prospective hitching ride per hour. Without another option except waiting in the Calgary yard, we rolled the dice and sealed our fates aboard a bright green Saskatchewan grain car.

Medicine Hat looked like a good small town stop as we tore through the downtown at unjumpable speeds. The 5 minute stop 10 miles outside of town must have been the crew change for our train. With no option but to stay on we cruised out of Alberta under a bright sun and 95 degree temperature. The next stop in Swift Current did not look very interesting so we stayed on and rationed our remaining water for the short distance to Moose Jaw. 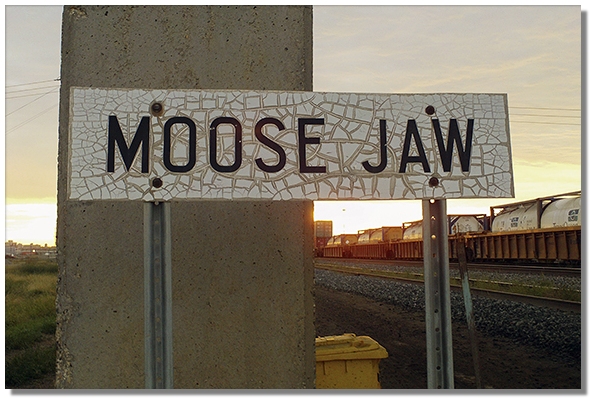 We arrived with half the day left to explore our new stop. Moose Jaw has a modern library in an older building that is situated within a perfectly landscaped park just outside of the main drag. After checking up on the world from the internet's point-of-view I resupplied my gear and bought an expensive 12 pack of cheap beer. Canada's booze tax is exorbitant so either quit drinking or save plenty of scratch before entering the country. A half rack of beer comparable to Mickey's in quality costs twenty US Dollars.

The stretch east from Moose Jaw to Winnipeg was flat and fast. We arrived in the large city and spent a day checking out the downtown and shores of the Red River, which provides a quick escape from the concrete landscape. The CP yard is ginormous but not impenetrable. If a traveler wanted to catch a stopped train waiting for departure they could, but the yard throat offered a greater place to relax in the shade and shadows of the city.

We caught an evening stack train that rushed out of the plains and into the woods. Ontario is a large province of seemingly endless lakes and trees. A few towns along the way to Toronto provided us the opportunity to get provisions within the greater wilderness. One of the best stops on the route is situated at Lake of the Woods; Kenora is a small town you can paddle away from and get lost on dark water surrounded by endless secluded islands of forested rock.

A few hundred miles further east got us to the shore of Lake Superior. Thunder Bay is a large city in Northern Ontario with over one hundred thousand people and spreads for miles along Lake Superior. The ride east from Thunder Bay is spectacular and our timing was perfect with a 3 am stack. As the sun peered over the horizon the train snaked along the edge of the massive icy lake and presented some of the most spectacular scenery I have ever witnessed. 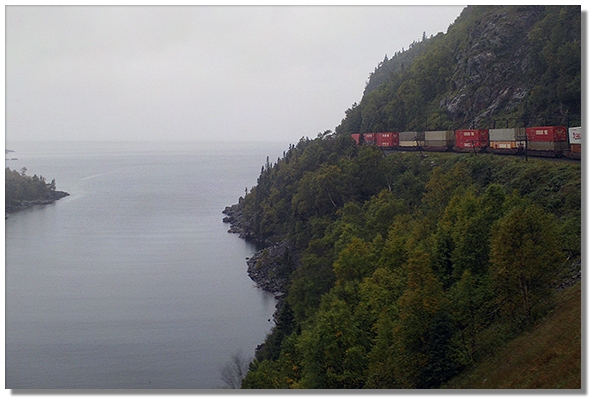 One of the most challenging hurdles along our journey came shortly after the epic lakeshore scenic tour. While riding in a comfortable mid train DPU and monitoring the radio frequencies we overheard dispatch inquire about "possible" riders to the crew. We did not think much of it as the engineer reported nothing out of the ordinary. Shortly after, the train came to a seemingly random emergency stop. After the conductor verified everything was safe and ready to move, the dispatcher came on again with a theory about riders pulling the emergency break at the crossing in order to escape detection in town. He also indicated there would be people ready to check our DPU upon arrival in Chapleau. We packed up and prepared to get off whatever way possible.

The woodsy area that the railroad navigated outside of Chapleau is about as far away from civilization as we got on the entire trip. The dispatcher's theory about riders stopping the train at the crossing made sense because it was the last road the tracks crossed before arriving in the next town 40 miles further. Without a way to prove we did not touch the brake and not wanting to arrive in Chapleau as foreigners trespassing on a cargo train to awaiting OPP (Ontario Provincial Police), it was time to jump.

At 18mph on the engine speedometer we knew getting off was easy. The milepost was at 13 by the time we jumped so the distance to town was not far. Mileposts going east on the Canadian Pacific all zero out to the next crew change so knowing where you are when surrounded by endless forest is not difficult to discern. The hike was possibly my favorite part of the journey with the peace and quiet of nature undisturbed and the absence of deafening cars. Though trains are much louder, they have a melodious timbre that is unmatched by the rival highways.

Chapleau is a cozy little town hidden by trees. A large river runs through the small community and a couple of great thrift stores made for a clothes swapping occasion. Macklemore would have come up big with only five dollars in his pocket at these local venues. $5 for a 40 gallon trash bag full of your-choice-used-goods set us up with more than we needed. For the final ride we donned fresh threads with polo style collars and yacht club colors. Completed with a twelve pack of ice cold cream ale we savored the victory ahead.

Toronto is a megalopolis with a long distance from the Scarborough yard to downtown. Our last site to see on the trip was the CN tower which once boasted itself as the world's tallest building. For $35 we were shuttled to the middle observation deck where it was disclosed to us that it would take another $15 to be shuttled to the top. We did not take the bait and instead spent the funds at the sky high bar overlooking the city while chatting with the barkeep about the ins and outs of life as we knew it to be. Our final moments in Canada got us considering a CN train trip from Prince Rupert to Halifax. Always nice to know there is more left for next time.